THE GREAT UNION STATIONS AND THEIR TRAINS

Prior to Amtrak's creation in 1971, many private railroads operated passenger trains throughout the United States. And beyond Chicago, most of the larger cities in the Midwest and beyond had their grand old "Union Stations", hosting nearly all of the passenger trains serving those cities.

Included is information on these great old stations, including brief histories, and their locations. For the larger terminal or union stations, where available, detailed information is included for those stations. Including the number of tracks, whether through or stub, and information on interlocking tower control. Over the years, many tracks at many stations were removed from service. And many interlocking towers were replaced with remote or centralized traffic control.

Cities identified as "Terminal Cities" typically had the grandest stations, large terminals with numerous tracks capable of handling many terminating and connecting trains. Some of the other cities had a smaller Union Station. "Union" typically refers to a station and station trackage jointly owned by several main line railroads. In many cases, a separate railroad company was formed, jointly owned by the participating railroads.

Included are sample departures and arrivals of trains for each railroad at each station for the years 1942, 1956, and 1971.

These pages should give a sense of what it was like to be in those grand old stations during another era, and be able to see the departure boards showing the many trains serving many destinations. An era when train travel was truly an option. An option which hopefully will eventually become widely available once again.

Except in Chicago, and in cities along the Northeast Corridor or West Coast, the shrunken Amtrak passenger network no longer justifies the large terminal stations with many multiple tracks. And those grand old stations have all been either vacated or considerably downsized.

To aid in locating stations, links to zoomable Google maps are provided, which also show the routes in and out of these stations. Also included are links to various other Web sites, showing what has become of these great old stations.

Throughout most of the United States, the levels of passenger service declined significantly, before the invention of the "Solari board". Solari of Italy developed these boards with mechanical flip technology, for display of departure and arrival information. Several major stations in the Northeast Corridor were equipped with Solari boards. The last remaining Solari board at Philadelphia 30th Street Station, was scheduled to be replaced in 2019. 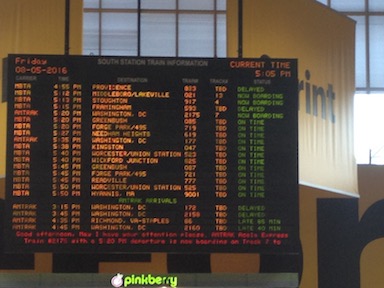 Solari's mechanical flip technology generally has been replaced with digital displays, requiring less maintenance. In 2010, the Solari board at Boston South Station was replaced with this new digital board.

For each railroad and station, trains are listed in order of time scheduled, with "am" and "pm" omitted except where necessary for clarity.

Origin and destination cities are as of 1942. Many trains had their routes shortened between then and 1971.

Certain trains did not operate daily during certain periods.

Some railroads eventually abandoned service at the main downtown stations, terminating at outlying points. And some railroads operated "mixed trains" (combination passenger and freight), which terminated at a railroad yard instead of a main station. These are not listed.

Amtrak trains continue to serve all of these stations.

STREAMLINERS AND OTHER PASSENGER TRAINS IN THE US

Brief histories of streamliners and other passenger trains which served these great railroad stations, up to the 1971 formation of Amtrak. Information for the trains is from various issues of "The Official Guide of the Railways", and from various actual railroad timetables.

Information for the station details is from various sources, including "Railway Age" and related magazine publications, "Passenger Terminals and Trains" by John A. Droege which was originally published in 1916 but republished in 1969, and various railroad employee timetables and track charts. For many union or terminal railroad companies, employee timetables have been difficult to locate and such information has not been included. Any leads on such information would be appreciated. Bill Vandervoort